Today was James’s last chance to get his daughters back. He brushed his teeth, combed his hair and put on his best outfit, a button-down shirt and jeans. He checked his watch impatiently as he sat at a fast food restaurant; there was still an hour left before his appointment with Michael, the executive director of one of the largest father advocacy organizations in southern California. He was the best chance James had at convincing the courts homelessness wasn’t a crime and that the father should get his girls back.

When Michael arrived, James greeted him with a handshake. “You’re my final hope,” he said. Within the first minute of the meeting, James—who had broad shoulders and towered near 6 foot 4 inches— broke down. Michael sat across from James and asked him how he was feeling. “Nervous,” James replied. “But I’ll do anything to get my children back.”

It had been a full year since James started his battle with the courts. After he and his wife divorced, the couple’s two children went to live with their mom and her new husband in California. James got an apartment in Illinois and worked as a cross country truck driver, traveling to visit the girls in California when he could. Nearly four years passed. In 2013, James tried to call his two girls to check in. He couldn’t get ahold of them. After two weeks, he found out why: the FBI arrested the girls’ mom and stepdad on charges of sexual abuse and distribution of child pornography. Instead of contacting James, Child Protective Services (CPS) moved the two children to the Polinsky Center before placing them with a foster family.

When James finally got in contact with CPS, the agency told him to drop everything and come get his kids. He did. The truck driver took a leave of absence from his job and drove to California. As a non-offending parent who shared custody with his ex-wife for years, taking on full custody should have been easy. But it wasn’t. When James got to California, CPS didn’t return the girls. Instead, the court took custody of the children. Since the girls had already been through so much trauma, the judge wanted to monitor the case to make sure James could keep them safe before giving him custody.

When James first drove to California, he thought he would only be there a few weeks; but what started as a three-month monitoring period dragged into six months, and then twelve. He lost his job in Illinois, and exhausted all his savings. With no end in sight, James realized he needed to get a job in California. He tried, but couldn’t find one. He moved into homeless shelter, but left after three nights. “He just couldn’t handle it,” says Michael. “There were so many mental health and other issues going on that he decided he was going to try to find a better place to stay and sleep.” So James set up camp outside of a gas station. For seven months, that’s where he called home.

Separation from a loving parent is rarely the answer to a tough situation. When challenges exist, such as homelessness or addiction, parents need additional support to keep their children safe. What kids need most of all is to have their parents be okay. Yet situations like homelessness almost always prevent CPS from reuniting families. When CPS keeps children apart from the ones they love, the trauma is often worse than whatever difficulties they faced at home. Protecting those sacred familial bonds is crucial to the emotional stability and wellbeing of all people, especially children.

James was still living at the gas station when Michael met him nearly a year into his ordeal with the courts. Throughout that time, the judge ordered that James visit his daughters at their foster home every other day. The judge also wanted him to get a job, and find somewhere to live before she reunited the family. However what the court didn’t realize was that the girls’ foster mom lived nearly 45 miles from where James did. To see his daughters, James had to catch a bus, and then a trolley. Traveling each way took him two and a half hours. James couldn’t miss a visit, but needing every other day off made it hard to find a job on his own.

At James’ next court date, Michael stood by his side. The advocate told the court he would help James find a job (despite the father’s restrictive schedule) and an apartment. The judge warned that the foster mom wanted to adopt the girls, and that if James didn’t find housing and a job, the court would consider terminating his parental rights. The court gave them three months. With a renewed sense of hope, James followed Michael’s advice as closely as he could over the next weeks. He practiced interview questions, arrived at his appointments on time and wore the suit Michael bought him for every job interview.

Within two weeks, James found a job driving a delivery truck throughout the city, and a room at a family shelter where he and his daughters could live. Three months later the social worker arrived with his children. The dad hugged them and cried, even surprising them with a bunk bed he assembled. That evening the family ate soup for dinner as they poured over plans to do something fun as a family on the weekend.

“They were thrilled to death,” says Michael, who saw a unique bond form between James and his two kids. “I remember having a conversation with the older daughter and letting her know it might be tough because it was going to be a while before they could afford their own place. She was very clear that she didn’t care how long it took. She wanted to be with her dad.”

Before the judge would consider granting custody to James, she told him to get a full time job and a car. Michael helped him with both. As the weeks passed, James and his daughters settled into a routine. Since he worked twelve-hour days, James enrolled his girls in before-school and after-school programs. He started picking up weekend driving shifts, too, to pay for the girls’ new clothes and school supplies. However when James met with his social worker at the next three-month check up, she told him she worried the girls spent too much time away from home. “They’re safe,” James protested. “They know I love them. They know I’m working for them.” Despite his explanation, the social worker threatened to take his daughters again—this time for neglect. For the second time in his life, James felt powerless. The thought of losing his girls made his heart pound in fear. James cut back on his hours at work, but since the company didn’t want a part-time driver, they let him go. 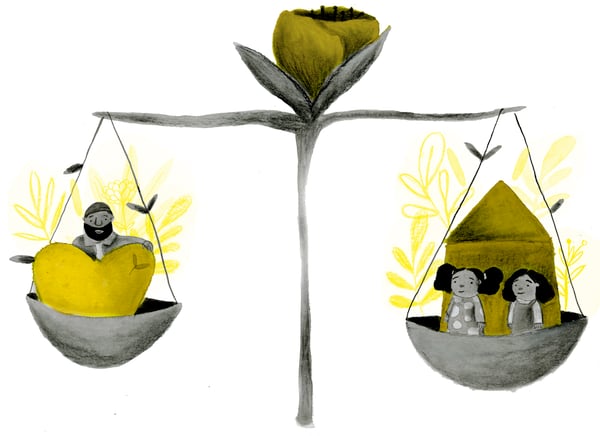 Stuck without a job again, James turned to Michael. “Do you have any family members you can call who can come stay with you?” Michael asked him. “I can try my ex-wife’s mother,” James said, finally. She had always been kind and supportive, and often told James how good of a father he was. That evening, with his daughters and Michael beside him offering support, James called her to see if their family of three could move in with her. She said yes immediately. She missed her granddaughters and wanted to do whatever she could to keep the family together. With someone to watch the girls, James was able to find another job.

After two years, CPS closed the father’s case and James regained custody of his children; but it’s one the agency never needed to open. Even in the face of homelessness, sleeping in a shelter with your family is better than sleeping in a stranger’s home. If James had received support earlier—the same kind of help CPS willing gave to the foster family who cared for his girls—then the father and his children could have avoided two years of emotional trauma that came from being separated and fighting to stay together. Poverty and homeless aren’t crimes. Imagine the years of hurt we could save in a world where challenges like these didn’t prevent parents like James from losing even one day with their children.